Up for a game, anyone?

This photo may give one the impression that this is just a nice friendly family game of cards...
(Left the right around the table: Jeff, and his brothers, Stephen, Phid, and Halley.) 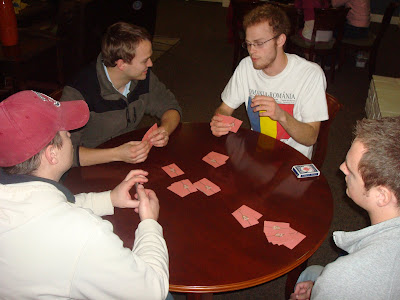 ...but you'd be sorely mistaken. However, not as sore as the guys are. Instead of betting money, they bet in indian burns. 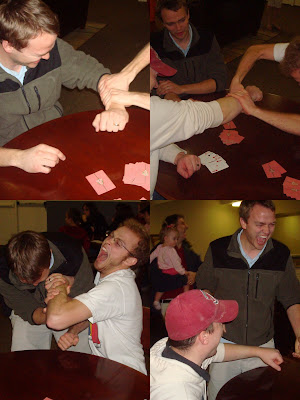 Another twisted version of Abbott brother's play is the way they play "Guess Who?". You know, the 20 questions style game where kids have to guess which character the other has chosen. 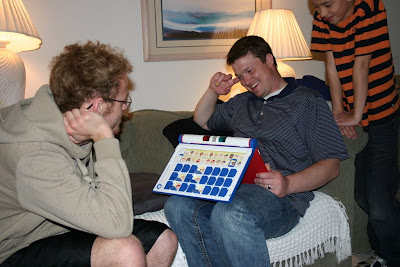 (These are direct quotes here people)

"Has your person ever participated in plural marriage?"

"Does your person have poor self esteem?"

"Does your person have backne?"

"Has your person ever been on America's Most Wanted?"

"Has your guy ever had a date in his whole life?"

"Has your person washed his hair in the last month?"

"Has Stephen King ever based a character on your guy?"

I think you get the picture. The rest of us try not to ask too many questions, it's much much too easy to pokes holes in their logic... mostly because there is none. However, the astonishing part is that they can usually guess the correct person based on these inane questions. 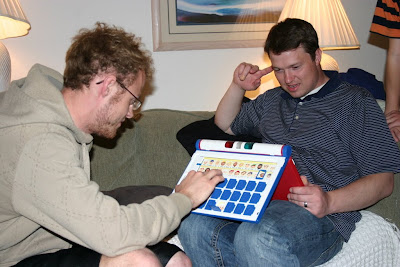 You may be asking yourself why Jeff is playing "Guess Who" with a homeless guy, it's actually his brother Philip who decided (to our displeasure) not to shave or do his hair while on our vacation over Christmas break. One word: FANCY.

HAHAHAHAHAHA! Oh my gosh that is so funny! The indian burns and ridiculous questions have me belly laughing. What a great relationship to be documenting.

This is one of those moments you just want to be a fly on the wall. Backne? Ha!